I had some fun taking pictures of our Christmas tree with long exposure. 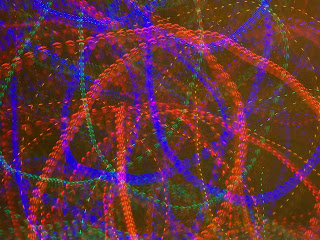 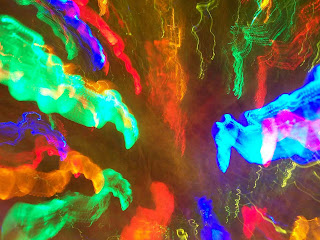 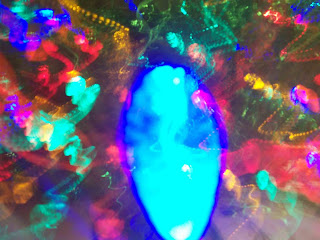 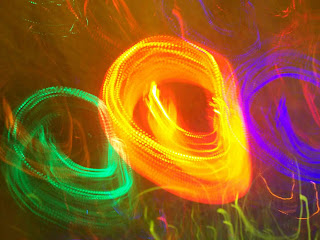 Faith and the Unexpected

I felt kind of bad about leaving a post up through Christmas entitled "the road to hell", although I do think it was somewhat appropriate since I have been working retail throughout the season.

Last night I was talking to a good friend who was asking me about my future plans, and after expressing some uncertainty and/or preoccupation, he encouraged me to have faith, which led to a discussion about what faith is. I said that I have faith everything will work out, but I don't have faith necessarily that it'll work out to the plans I am working towards.

I spend a lot of my Christmas meditations thinking about Mary and Joseph. So last night as I read the nativity story I wondered again about Mary. I can't begin to imagine what she felt on that night. The angel foretells the birth of the Son of God, and I can't help but think of all the things she experienced that must have made her doubt that. The barn, the fleeing into Egypt, the scorn from family, the strange and intense ministry, culminating at a brutal death. We know the disciples had problems with grand disillusions about the kingdom of Jesus-- imagine what his mother must have thought.

I wish so much we heard more from Mary in the cannonized gospels (she probably shows up more in apocryphyl work, but I don't know from sure). Luke's account gives a few peeks into her thoughts, which I'm assuming Luke garnered directly from her. I wonder how she felt when she was praised, only to have Jesus rebuke the thought. I wonder how she felt when the family went to see him and he denied the biological family but claimed all believers as his family.

I don't know how she handled it. I don't know if she was bitter or accepting, warm or hardened, faithful or doubting. Clearly she was loyal to her son, though it must have been difficult. I don't know about the faith of Mary. I assume she was faithful. She was the woman chose among all those in the world for this burden and joy.

I have been rather discouraged lately by some things, and when I say things I mean people, and when I say people I mean friends. :) Nothing big, nothing intentional or malicious, just run of the mill frustrations. Disappointments and down times happen in all relationships-- nothing new under the sun.

Well in a rare moment of spiritual clarity, I realized that my frustrations were probably a ploy from Satan to get me discouraged about ministry and opportunities God wants me to pursue. Then I thought, "but still, that's a hurtful thing of my friends to do..." Then it dawned on me. Satan can use people to get to us.

I'm not accusing anybody of being hell's angels, but I think Satan can and does use good, Christian people to affect us negatively. This may be a more powerful tool than most, because while we may not care what the stranger on the street thinks, a cut from a friend wounds very deeply.

They say that the road to hell is paved with good intentions, and Lord knows I'm guilty of this. So as I'm processing all of this tonight, I decided to stop thinking of my friends and start thinking of myself, and all of the beloved people in my life I am hurting through my good intentions and thoughts that are never acted upon. Who isn't feeling loved because I haven't made that call or sent that email? Am I going to continue to let Satan use me like this?

I'd never thought of it like that before... but I don't think I'm off base. Maybe my good intentions aren't only paving my "road to hell", but driving people I love into the same direction because I'm not following the Spirit's leading on how to show God's love to them. Sins of omission are just as real as any intentional evil.

Especially during this holiday season when many people feel more emotional or vulnerable, let's make the effort to be not only well meaning but acting on our thoughts of kindness.
Posted by ann at 10:19:00 PM 2 comments:

The SojoBlog Awards for 2006!
aka-- another survey ripped off of Nina.
1) DRINKING BUDDY OF THE YEAR
Oh my, this can't go to anyone except Ivan. :)

3) NEWCOMER AWARD - NEWEST FRIEND?
Lots of people from Brazil. I'm going to have to go with a three way tie between Pamela, Thiago, and Jessica.

3) HIGH POINT OF THE YEAR?
Probably when I was able to eat again or when I got my feeding tube out.

4) LOW POINT OF THE YEAR?
My near death experiences in January?

8) BEST NIGHT OUT?
My night out in São Paulo with Thiago, Thauana, Felipe, and Guto. Too much fun. :)

9) WORST NIGHT OUT?
The night I broke my toe and sat in the freezing hospital with the mean doctor.

10) WHO DID YOU SPEND VALENTINES WITH?
Me, myself and I.

11) BEST RELATIONSHIP?
Ha, well hmm, that is a good question. There were about 3 people who truly preserved my sanity this year. I hope they know who they are.

15) BEST DECISION MADE THIS YEAR?
One word-- Brazil.

16) WHAT ARE YOUR PLANS FOR NEXT YEAR?
Forming.

17) MOST STUPID IDEA WHEN DRUNK?
None-- "homey don't play 'dat." But as for other people I saw drunk, I had a friend decide it was a good idea to direct traffic in the street. Bad idea. :)

18) BUTTHEAD OF THE YEAR?
Donald Rumsfeld

19) MOST LOYAL FRIEND?
I love you all, but I've gotta go with Meredith.

Thanks to Dan for the tip on this. I'm pretty happy with my results. In my line of work it's good to not have an accent. I wish I could take a test like this in Portuguese... I'm pretty sure I'd come out being a strong Paulista. ;)

Email ThisBlogThis!Share to TwitterShare to FacebookShare to Pinterest
Labels: English

It's been said that you can use the Bible to argue anything. It's true. This is why I don't like what I call "acrobat" Bible studies, when a person speaks on a topic and has you flip flop through your Bible to catch wayward sentences that may relate to that subject (or not). Satan used scripture in the temptation of Christ. The word of God is a sword, and it can be used quite violently. From the law of Moses until now, the scriptures have been used by religious people wielding it recklessly and for their own power.

But the word of God is a double edged sword. I don't really know what that means in context, but here's how I'm going to use it. :) There's the prior use for the sword as I mentioned earlier. But the Bible is the truth of God, and I have this vision of a lost person cutting through dense overgrowth to find their way back to the path. Kind of an image of one of the seeds in Luke 8. You don't know what you're going to find as you continue on, but each step is progress.

The Bible is all about paradox. Weak and strong, humble yet exalted, sinner but saved. I think this is another one. One of the most evil things is to twist the word of God into your own creation; that is pure blasphemy. But one of the most beautiful things is to find a ray of truth that you know would never come from a source of this world.

We hold the same book in our hands, but every one will choose how they're going to approach it.

I really like the whole Thanksgiving/Christmas/New Year/holiday season. I think the song rings true when it says it's "the most wonderful time of the year." Maybe that's a little too sentimental of me, but hey, I like it. I especially like my dancing Santa and watching Christmas movies. And the music.

Anyway, this may be an ongoing blog theme until Christmas, I don't know, but I want to say a little about my least favorite part of Christmas. Gifts. I love giving gifts, but at Christmas I, like most people with any good sense, get frustrated at the rampant consumerism. So I want to present you with what I think are good gifts and bad gifts. Feel free to add to my list.

The diamond "journey" necklace. I think this is a genius marketing ploy by the diamond industry. First they had the whole, three stone "past, present, future" thing, and then the "women's right hand ring," and now this. What a great way to convice you to buy 7 diamonds instead of one. I'm not a diamond girl, for several reasons practical and ethical. So I think this is a bad gift.

A Lexus. Have you seen these commercials? First of all, who buys a $50,ooo luxury car for their spouse at Christmas? I'd kill my husband if he bought a car, especially like that, without telling me.

Blood donation! Not only a good idea for the holiday season, but all year through. But this is the season to give. There may be a blog coming up about this, but I honestly feel like every person who is able should be donating regularly. You might be thinking, "this is a gift?" Sure! You can give in honor of someone who's received a transfusion, like, I don't know, maybe your favorite blogger. :)

Ten Thousand Villages -- a fair trade organization that lets you buy artisan work from around the world while paying the artists fair prices. Really beautiful things, too.

World Vision or Heifer International -- These groups let you buy things like a cow or a goat for a family who desperately needs it.

Art by the children of St. Jude's hospital-- What a precious gift one of these items would make! Not only are you supporting the kids, but also giving someone a reminder to pray for the children who make these things as well.

Last week I forgot Thursday Thanksgiving! Shame on me! It wasn't that I wasn't thankful, I just forgot. :( Oops!

Then today I was having a craptacular day. Nothing big happened, just all the little things seemed to go wrong. So I very nearly didn't post one on purpose today. How wreched of me is that?! But I just received an email that more than made up for any little junk. So thanks to that little Godlight, I now present my Thursday Thanksgiving.

I am thankful for-- 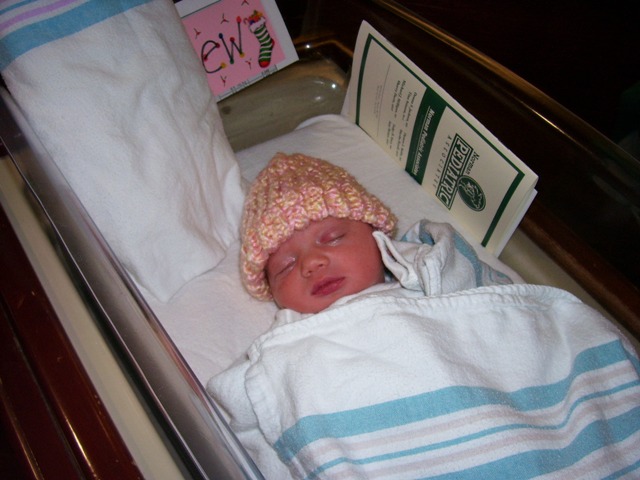 One word and Anti-social drinking

You can only answer with one word. No explanations.

Something to make you smile today

We can all stop holding our breath and praying for the light to re-enter the world, because it has come. Seriously. Wow. Are we avoiding reading about half of the story of Jesus and discarding virtually every culture in the world outside of the US? Wow.

In response to the title of this book, a friend who shall remain un-named quipped, "Well, I'm not a social drinker. I always drink alone. I'm an anti-social drinker." :) 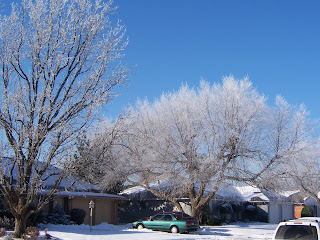 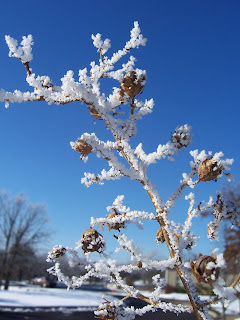 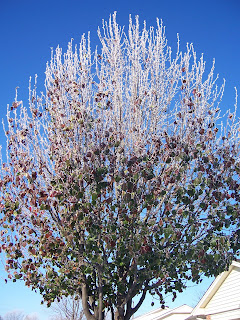 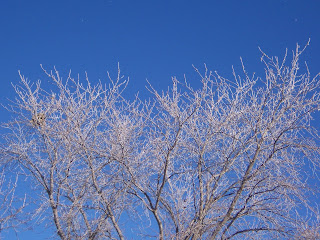 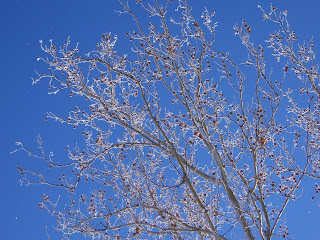 Email ThisBlogThis!Share to TwitterShare to FacebookShare to Pinterest
Labels: snow

I arrived in OKC on Wednesday afternoon, just before the big winter storm hit. I've been pretty homebound from Wednesday night til today, but it's been great to be with the Carpenters and I've visited with the McBrides too, since they live just across the street.

The weather was pretty bad. It was sleeting all Wednesday night then snowed all day Thursday with temperatures in the teens. Thank God for a warm house.

I took some pictures. Here you go-- 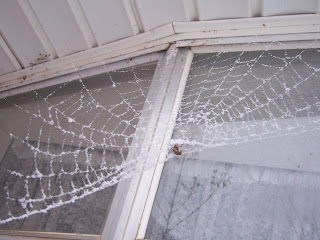 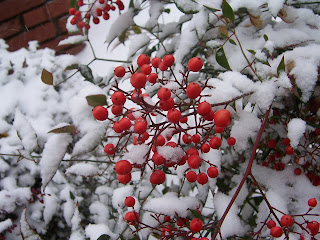 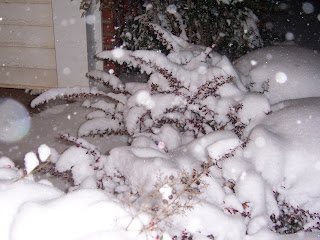 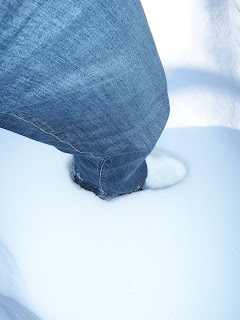 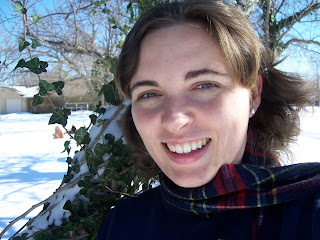