In the spirit of starting a tradition, I now present to you the

3) NEWCOMER AWARD - NEWEST FRIEND?
I think most recently I've made new friends at work. We are friends, right guys? :)

3) HIGH POINT OF THE YEAR?
Joining Quail Springs church, closely followed by getting the job at OC.

4) LOW POINT OF THE YEAR?
Deciding not to go back to Brazil.

5) BEST HOLIDAY?
Labor Day was one of the funnest days of my life. We graded special-ed papers and then played in the pool for hours. Hilarity ensued. :)

8) BEST NIGHT OUT?
Hard one... there was this fabulous soiree... also a girl's night out on Yom Kippur... and a lot of great, late-night coffee talks.

9) WORST NIGHT OUT?
There was one night I cried on the McBride's couch for most of the evening because I was sad about job hunting.

12) WORST RELATIONSHIP?
Myself, I think. I spent a lot of the year really beating myself up.

13) FIRST GIG OF THE YEAR?
Partyin' in Ft. Worth with Meredith and the Martin crew.

15) BEST DECISION MADE THIS YEAR?
I don't really take credit for this, but ending up at Quail Springs church.

20) BIGGEST CHANGE OF THE YEAR?
I haven't left the country or been in the hospital in over a year! Holy moly.

Woo hoo 2008! I have a feeling this will be a fantastic year. I don't "tag" people, but if you choose to fill this out on your blog, let me know.

Emmanuel, an anniversary and reflection

Today as I made the drive from Oklahoma to Texas, I suddenly remembered that on this day two years ago, December 23, 2005, I also made the trip from OKC to T-town. Circumstances were much different then.

I was weak and fragile, having at that point endured six months of illness, two months in the hospital, and a major surgery. I weighed about eighty five pounds and didn’t have an ounce of fat on me, and could only walk a few steps. But I was alive. That trip home didn’t mark the end of my battle with my health; in many ways, the worst was still ahead.

But in this season to remember Emmanuel, God with us, I found it very poignant to think about how far God has brought me in two short years, in health, maturity, experience, and spirit. I have learned that there is a strength in me I never imagined-- not so much in my own spirit but in the Spirit of God within me.

This is the season to celebrate incarnation—God with us. One Christmas song that’s been on my mind lately repeats this chorus:

The miracle of Christmas is that we have a God who joins us in life. The God who brought me through my illness two years ago is the same God and same strength that empowers me to live each day guided by His Spirit. God is with us.

May God bless you with fresh eyes to see and experience Him with you.
Posted by ann at 10:24:00 PM 1 comment:

Recently as I was talking with a friend, I was bemoaning some of the things I feel like God has put on my heart to do. They shared some good perspective, and since it is the appropriate season, I thought I'd pass it along:

Yes, perspective is everything. I've never been left so speechless and tickled. :)

In related news, last night I read one of the most comforting single womandom thoughts. The book noted that all of the women in the genealogy of Jesus were single when they acted in the bravery and faith that they are known for. Rock on!
Posted by ann at 11:15:00 PM 1 comment:

Let Your Light Shine Down

The Calmer of the sea
Here in this room with me
So gently welcoming
The weakest things in me
You are the blood over
The door of my heart
What pain You spared me from
How could I know it all?

Oh wonderful love, You died for me
The power of Your life is in me

Oh Jesus, You became what was my deepest shame
That at Your very name
My calloused heart would change
How could You, oh perfect One
Love me, when I have done nothing that's worthy of
My freedom You have won

Open up the heavens
Poor down Your Spirit
Hold me God
Jesus, wherever You lead
I'll sing harmony
Hold me God

So gently welcoming the weakest things in me... if that's not reason to rejoice in our God, I don't know what is.
Posted by ann at 1:09:00 PM No comments:

In case you're wondering what the going rate is in karma for making fun of an ice storm, for me at least, it has been almost 6 days without electricity in my apartment.

Before you cry, wail, gnash teeth and pity me, I have been very well taken care of while staying with friends. The cat is also okay, although severely attention starved. My house's heat runs on gas, so she has not turned into a cat-cicle. In fact, it has probably been substantially warmer in my house sans electricity than in my office with electricity.

OC was pretty hard hit electrically and in the landscaping. Our administration, faculty, and staff really handled it all like champs, and I'm not just saying that because I work here. It was a really tough situation but they kept everything under control. (FYI-- For details of what happened on campus and the response, click here for a statement from the President).

I went to check on the house/cat yesterday, and it still amazes me how torn up my neighborhood is. I think we have a lot of older trees, and most peoples' yards are filled with limbs that fell or they've had to cut. I'm hopeful that maybe we'll get electricity today, but with the second wave moving in today/tonight/tomorrow, I'm not sure what will happen.

Just wanted to update you all. Stay warm and safe.

Hello all, from the great white north (of Texas, that is).

Yesterday morning I braved midtown's winter fury and make my way to the promised land, Edmond. Driving north on the main trail really wasn't so bad, since I never went above 25 mph.

After arriving, I went to the local oasis, Starbucks. I think that Starbucks loyalists will always go out, no matter rain nor sleet nor snow. And apparently I've become one of them, or at least have made acquaintances who are such folk.

Once refueled with my morning coffee and meeting up with a fellow pilgrim, we set out to find a local house of worship, which was harder than we thought, considering we live in the buckle of the Bible belt. Have these people no loyalty to the weekly meeting time??? :) But we found one that was hosting an "abbreviated" service. Apparently that means five minutes of stark silence (since when do CoCs practice contemplative meditation? heehee...), 2 songs, and communion. It was nice.

Then we found some vittles at a local eatery. I don't feel guilty patronizing a restaurant that is forcing it's workers to come to work in perilous conditions, because if nutheads like me didn't go it, it would be all for naught. We took full advantage of free refills and delayed going back into the ICE APOCALYPSE 2007 for three hours.

After we'd worn out our welcome at Chili's, we decided a movie was in order. So we braved the roads and went to my friend's abode to watch Just Friends; I highly recommend it! Good company, good movie. Great way to spend a "baby, it's cold outside" kind of day.

Just as the sun was setting I braved the trails once more to reach my surrogate parents' house near my work. They let me spend the night. After more wonderful conversation I settled in for a long winter's nap, only to toss and turn as I was wondering about the actual severity of ICE APOCALYPSE 2007.

An early morning email checked revealed work was indeed canceled, due to power outages on campus. Though at first there was rejoicing, it was soon replaced with the common sense knowledge that I would rather be at work then go through an ICE APOCALYPSE.

Thankfully, I'm still with friends and within walking distance of more. We have power, heat, food, TV and internet.

In all seriousness, if you're in this mess be careful. Only go out when necessary, and don't take any unnecessary chances. :)
Posted by ann at 8:17:00 AM 5 comments:

Let's get a little bit Rowdy... 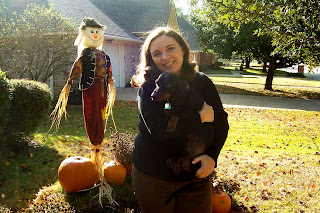 Awwh... if only Penny would be so cooperative. 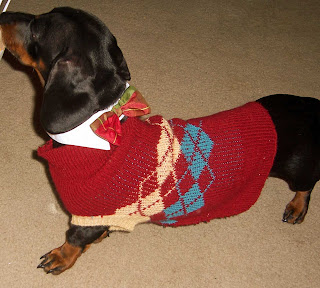