On Tuesday night I crossed off the first of my 101 in 1001 goals. Actually, it wasn't on the list before I did it, but then I realized it should be. Besides, it's my list and I'll play by my rules. :)

I went to the Harry Potter 5- Order of the Phoenix premiere! Actually, my goal was to go to one of my friend Blake's premiere events. He's big into organizing groups to go and see movies when they come out (i.e., LOTR, Harry Potter, I don't know which others). I've never gone, but always wanted to, so this was my shot.

The truth is that I tried to back out at the last minute. Common sense and prudence threatened to overrule my sense of fun. I wanted to see it, but going to a 12:01am movie and then working the next day sounded like torture. But Blake talked me into going, and in the end I'm very glad I did.

I arrived at 9:30 to get in line (yes, for a midnight showing), and the place was a freak show. :) I don't know how many screens it was playing on, but I'd guess at least 12 and they were all sold out. And by 9:30 the place was pretty full. And, like I said, the crowd was quite colorful. :) I felt like such a muggle. ;) A lot of people dressed up, and there were some hard core geeks there. Of course Blake dressed up. He was going for the older, preppy Gryffindor look. :) Here's a picture of him and Mark: 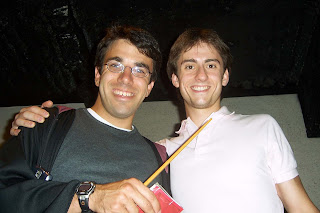 Email ThisBlogThis!Share to TwitterShare to FacebookShare to Pinterest
Labels: 101 in 1001, friends

We went and saw it here in Itu on Thursday. It was Katie and Lucas (my fellow Canadians, Vitinho, Regina, Iara and Alexandre. The people sitting behind me were talking the entire time and I came so close to telling them "Para de fala!!!!" and some other nasty things but I controlled myself. miss you girl!