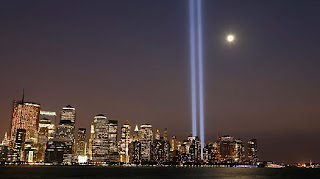 I write this mostly for myself, and for history. I want to remember what 9/11/01 was like. What I was doing. How I felt. I should have written this long ago, but as the time is seared into my mind, it still feels fresh.

I was a sophomore at OC. It was probably the 2nd week of school, and the first year of the campus-wide wireless internet/laptop program. My habit was to wake up and check the news first thing. By the time I woke up, the first tower had been struck.

I can't lie; I've never been to New York, and I didn't have a firm understanding of what the World Trade Center was. The bombing of 1993 was a very vague memory, as I was 11 at the time. So the importance of the place was lost on me.

My mom had sent me several emails already that morning, which was strange. She never sent email. But she sent several, with messages like, "Did you see the news? I can't believe this!"

My roommate, Traci, was in the shower. As she got ready for class in the bathroom, I was watching TV. I remember surreally going into the bathroom and saying, "Traci, I think our country is under attack." And it felt so crazy, because there wasn't an ounce of joking or sarcasm in it.

I didn't know what to do, so I went on to class. Physical geography. I took my massive IBM Thinkpad with me so I could check the news online during class, but every news site had crashed by that point. The professor hadn't heard anything about the attacks yet, and honestly didn't believe us when we tried to tell her. Finally she stopped class to go check the TV in the teacher's lounge. She came back pale and ashen, and told us class was dismissed.

It was a crystal clear day in Oklahoma City, just like it was in New York City. As I walked across our deserted campus, I remember honestly thinking, "What if I'm not alive tomorrow?" Because at that point, there was no comprehension of the magnitude of the attacks. For all I know (and as I believed initially), they were attacking every major US city. As I walked through the student center, I stared at the TV's tuned to news channels shaking my head. It was incredible, in the most literal sense.

I got back to my room and by this time, one of my good friends who lived next door, Meredith, was also watching coverage. I remember I was sitting in her room in front of the TV when the first tower collapsed. In my life I have never had a more visceral reaction to an event. I felt like I physically collapsed on the inside when that tower collapsed. It was so unexpected. I sobbed and wailed, "those people! those people!" knowing there were so many left in the tower still. It was so painful and terrifying.

I don't remember what I did that night. Traci (my roommate) told me that I was screaming in my sleep throughout the night. I have no recollection of that or having nightmares.

The next day there were times of prayer across campus. My group of honors program girls gathered to pray, and it was one of the times of most grieving prayer I've ever been a part of.

I know the fact that this happened so early in my young adulthood had a major impact on me and my generation. I had traveled abroad for the first time in May-July 2001, and so I had no time for pre-9/11 to become "the norm" in my travels. I was so malleable in world-view and understanding. I'm not sure I'll ever understand the full impact and how I would have been different if 9/11 never happened.

Ten years. How has it been 10 years? Our world is so different. I knew that day that what was happening was massive, but I think it's impossible to live a tragedy with that mindset, so reflection is done in hindsight.

What have I learned? What have WE learned?

Tragedy brings out the best and the worst in people. Revenge is a deep-seeded, primal emotion that can overtake us if we're not diligent. Pain is pain. Life is unjust. Hate is maddening. The human spirit is resilient.

I don't know the answers. But I do know it's important to never forget, to learn, and to grow.
Posted by ann at 8:00:00 AM No comments:

Six months from today I will turn the big 3-0. I would like to think that I'm going to take it with grace and class, but I'm not sure. It's freaking me out a little bit.

Among my peers, it's all the rage to make a 30 in 30 or 30 by 30 list, of things they'd like to do before turning 30 or during their 30th year. Well, I'm never good at setting goals, so I'm not doing that. And I think I can honestly say I'm lucky enough to have done a lot of the things in life that I want to do.