This year, rather than being a spectator at the OKC Memorial Marathon, 4 of my friends from church and I decided to form a relay team! I have to say that I had the best team in the world, and if you ever want a great activity to do with friends, a marathon relay is it.

In addition to my four sweet friends, I was part of TeamOC, which had over 400 participants in different relay events! It was so awesome to see our shirts wherever I looked!

I could say a lot about how much it meant to me to be there and to set goals and see them achieved. It's incredible. God is so good. I will just say this. As I ran I saw a woman with a shirt that said, "The miracle is not that I will finish; it's that I began." :) Can't add any more than that.

So without further ado, here are pictures! 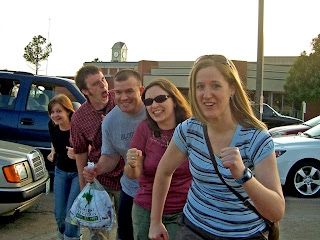 Our awesome Quail Singles Ministry Relay team! This is the night before at the TeamOC pasta dinner. From right to left, Amy, me, Wes, Harrison and Rebecca. We're in the order of our legs. 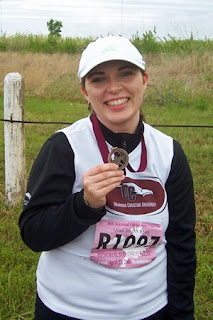 Me right after I finished my leg! Woooooooo hoo! This may be one of my favorite pictures of me, ever. It's a good feeling to be proud of yourself! 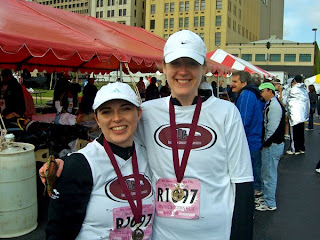 At the finish area after Amy and I finally found each other! She has been such an inspiration to me! 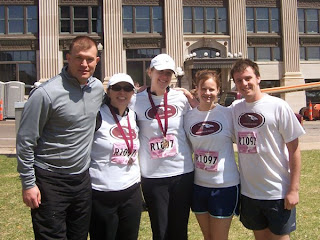 Our fantastic team after everyone finished. I love these guys, and can't wait to do it again next year! Time to set new goals! Woo hoo! Who wants to run the relay next year? 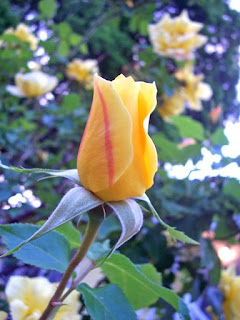 In honor of my homeland, though actually blooming in my neighbor's back yard.
Posted by ann at 10:16:00 PM No comments:

One of my friends has gotten me into the Tyler Perry films and plays in the past few months, and I am more or less hooked. Yes, I am so multi-cultural. :)

Sometimes it's slap-stick comedy, but the stories are laced with homespun, tried and true wisdom and common sense that is so often lacking in the world.

My absolute favorite is the play "Madea Goes to Jail," followed closely by "Diary of a Mad Black Woman" (the movie), "Family Reunion" (the movie), and "Why Did I Get Married?" (the movie). All of these are available at your local movie rental place.

Below is my all-time favorite Madea soliloquy, from "Madea Goes to Jail". It is fantastic. Lately I have been watching this scene on repeat and can't help but throw in Amens and Hallelujahs as Madea talks.

It's about a 10 minute clip, and the first half is the real meat, the second half is a hilarious old school R&B montage. I'll rate it PG-13 for mild language.

Anybody out there also find wisdom from unexpected places?
Posted by ann at 9:05:00 PM 1 comment:

Some may call this a vice, but my favorite music to listen to when I work out is hip-hop and dance mixes.

I love it. When I'm working out, I slip into my fighter mentality. I don't advocate a dog eat dog attitude, but I think that there is a lack of tenacity that is perpetrated in our American culture and even within the church. Meek, mild, and fatalistic really isn't all we're called to be.

Although they don't channel their frustrations and desires well the vast majority of the time, one thing a lot of these artists get is that you've got to be willing to fight for what you're working towards. No one will hand it to you.

The fact is that the things that are worth the most in life are things you have to fight for. For me, something I've had to fight for is my self-esteem, and my new workout regimen has been a big part of that.

So here is my workout playlist that pumps me up to kick butt through my workout. The bold are the ones I feel keep with the theme of the post.
*note, author does not necessarily recommend these songs

What are the songs that pump you up? What do you work out to? I'm always looking for new workout music.
Posted by ann at 6:00:00 PM 4 comments:

Sacrificing the Right to Vengeance

On Friday, I went to a screening of the film "Back Home," a documentary covering the story of one man who survived the Rwandan genocide in 1994. One of the themes of the film was reconciliation.

The method by which Rwandans have chosen to bring the perpetrators of the genocide to justice is called "gacaca", which means "grass court." At that time the the perpetrators come before the village, including the victim's family, and confesses the crime. Then, the victim's family has the opportunity to release the guilty party from their burden through forgiveness. There are still penalties paid by the offender, but this was described as the first step in their "re-humanization."

One of the words that struck me as the director talked about this process was the word "sacrifice." He said that in order for reconciliation to begin, the victim must sacrifice their right to vengeance. Those victims have every single right to demand justice be served and claim the authority to see the guilty pay for what they have done, but for the greater good, they forfeit that right.

To me, this is one of the greatest examples of selflessness I could ever fathom. It leads me to think of how much more then we should be willing to lay down our "right" to claim vengeance on those who have wronged us in the run of the mill, every day offenses.

There are times when we are done wrong- no question about it (although there are many more often times when we played a part in our being offended). But for those times when we are purely wronged, we have the choice to make the offender pay or to release them and help them "re-orient" to life in the Spirit rather than life led by the flesh, which led them into the offense.

Last night in my small group we read Numbers 21:4-8. It intrigues me because Moses had every right to be furious with the Israelites. He had been a faithful leader, and all he seemed to get was the shaft from the people. But when they plead with him to pray for them, he did. And because of his prayers, the Lord delivered the people.

I'm not sure how theologically sound this theory is, but I believe that those kinds of selfless, sacrificial prayers are deeply honored by God. When the offended can lay aside their right to anger and pray for the offenders, Satan's plan is thwarted and the Lord can work powerfully.

The Lord is good, and His ways are far above mine. This is one of those things that doesn't make sense to me, but I praise God for his love and the Holy Spirit that enables us to have moments where we can transcend this fallen world.
Posted by ann at 8:48:00 PM 1 comment: 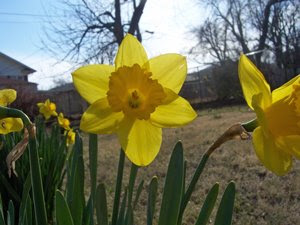 That's quite a promise. Only Jesus has the authority to make that kind of promise.

It's fulfilled in more than flowers, you know. Life comes in seasons, and yes, there are winters... but there is also always the promise of spring. New life born only out of the darkness and death of winter. All things new!

One of my spiritual gifts is passion. I relate this it enthusiasm, conviction, or just flat out caring. I think that for people with these types of gifts, Satan's primary objective is to make you stop caring.

If Satan can make you stop caring, then that pretty much cuts the life-line of energy and desire to the ministries and people to which you were called to serve.

Lately I've found myself saying more and more often that I just don't care, or worse yet, I can't care.

Passion carries quite a price tag. It's not cheap to live life passionately. Most people who embody this gift have battle scars to prove it. In the immortal words of U2, "the heart that hurts is the heart that beats."

I saw this prayer a few years ago and it has been on my refrigerator since. It reminds me that to being a Christ-follower is not meant to be a life of comfort, but holy uneasiness is what God gives us to keep us longing for home.

May God bless you with discomfort
at easy answers, half-truths, and
superficial relationships, so that
you will live deep in your heart.

May God bless you with anger at
injustice, oppression, and
exploitation, of people and the earth,
so that you will work for justice,
equity, and peace.

May God bless you with tears to
shed for those who suffer so you will
reach out your hands to comfort
them and change their pain into joy.

And may God bless you with
the foolishness to think that you
can make a difference in the world,
so you will do the things which
others say cannot be done.

I recently heard a wise man speak on the fact that the church is sadly lacking in laments.

Thankfully, we have St. Bono of Dublin, patron saint of every emotion the heart feels. :) Lately, I haven't been able to listen to my standard music. It's a little too gentle for how I'm feeling. So I've returned to U2.

What I like is that they can express the deepest emotions of the heart while remaining faithful to the complexity of each and in their intertwining.

Something is about to give
I can feel it coming, I think I know what it is
I'm not afraid to die, I'm not afraid to live
And when I'm flat on my back I hope to feel like I did
And hardness, it sets in
You need some protection on the thinner the skin

I'm around the corner from anything that's real
I'm across the road from hope
I'm under a bridge in a rip tide
That's taken everything I call my own
One step closer to knowing
I'm hanging out to dry with my old clothes
Finger still red with the prick of an old rose
Well the heart that hurts is a heart that beats
Can you hear the drummer slowing?
One step closer to knowing

Tough, you think you've got the stuff
You're telling me and anyone you're hard enough
You don't have to put up a fight, you don't have to always be
right
Let me take some of the punches for you tonight
Listen to me now- I need to let you know
You don't have to go it alone
Sometimes you can't make it on your own

Love is not the easy thing.
The only baggage that you can bring
Is all that you can't leave behind.
And if the darkness is to keep us apart
And if the daylight feels like it's a long way off
And if your glass heart should crack
And for a second you turn back
Oh no, be strong.
Walk on...
What you got they can't steal it
No they can't even feel it
Walk on...
And I know it aches, and your heart it breaks
You can only take so much... walk on

Does anyone else have any music they turn to when they need something that captures the rawness of life? Anyone want to identify the songs I referenced?