If it had to perish twice...

Some say the world will end in fire;
Some say in ice.
From what I've tasted of desire,
I hold with those who favor fire.
But if it had to perish twice,
I think I know enough of hate
To know that for destruction ice
Is also great
And would suffice.
-Robert Frost
These words make me think that Mr. Frost and I may have had a few things in common. I am a fiery, passionate woman, but my heart can also run cold with a stony frigidity that frightens me.

These are some photos I took this morning in my neighborhood. It's amazing how living organisms can survive under a blanket of ice.

Created with Admarket's flickrSLiDR.
Posted by ann at 4:29:00 PM 2 comments:

Please forgive me for looking cracked out in this video. And shaking. It was flipping cold. And I had just spent an hour between scraping off my car and trying to get home. 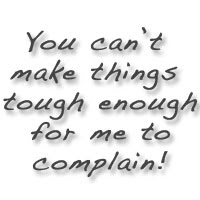 I used to make fun of those "motivational" posters that could be often found in workplaces. There's even a hilarious parody site that cracks me up called "Demotivators."

But ya know what? I've been humbled to learn that those positive mantras are quite powerful!

A few months ago, I came across a writer whose personal quote was:

"You can't make things tough enough for me to complain."

I was struck by that, because I heard it at a time when I was thinking about one of the most powerful living testaments to that philosophy in my life. I love how the foundational belief of that statement is, "I am stronger than this moment when I'm frustrated, tired, impatient, etc. Good will prevail!"

So I've been trying every day since then to live up to this motto. And some days I fail (and how), but some days I make it, and I know it makes a difference in my life and hopefully in the lives of those around me. So far I'm just experimenting at work, but soon I need to transfer it to other realms of my life. And so far it isn't getting easier, but I believe that it is worthwhile to persevere through.

I've been meaning to mock up my own little motivational plaque to set next to my computer at work to keep me accountable. Next thing you know I'll have a little zen rock garden. But hey, whatever works. :)
Posted by ann at 9:25:00 PM 3 comments:

I was thinking about things I like a lot and how I want to share them with people, and how I'd like to hear what else other people are liking.

So, in the spirit of trying new things, here is my proposal. Try one of my recommendations, and leave me a comment to recommend something I will try it in return.

The only guidelines I would ask are that they be free/low cost and non-political.

MUSIC
Justin Rizzo- His new album, Found Faithful, has quickly become one of my all time favorite albums. I got it 2 months ago and have listened to it almost constantly since. Most of my other music has gone by the wayside. Click his name to go to his myspace page and listen to "Spontaneous Psalm 1." Great example of prophetic, scriptural music.

BLOG
"Twenty Two Words" by Abraham Piper is a great blog. He posts several entries a day, but because each entry is only 22 words, it's like bite-sized goodness. He challenges me to be succinct and meaningful in my writing.

RADIO/PODCAST
My name is Ann, and I am a "This American Life" evangelist. Give a little listen to just one sample episode. "The Break-up" is great.

Email ThisBlogThis!Share to TwitterShare to FacebookShare to Pinterest
Labels: recommendation

Color me bad. Or good.

It's interesting to see how different colorizations can change the mood of a photo so much.

For example, here is a photo I took tonight at OC on my way across campus going home from work. 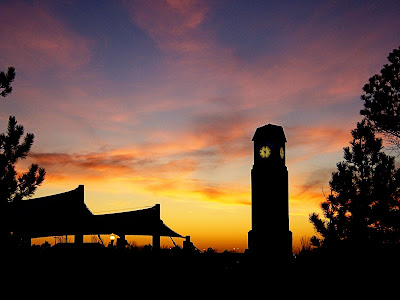 Now here is that picture with a photoshop treatment called "Lovely and Ethereal". It's a subtle change, but I love how it makes it all melty and beautiful, really highlighting the sunset on the horizon. 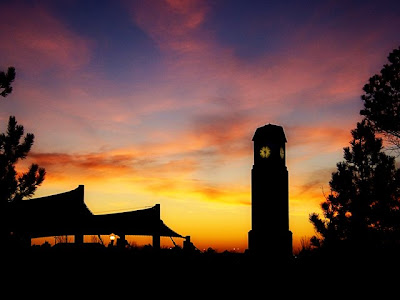 Now check out this treatment, called PW's B&W. It's suddenly like the setting for a ghost story. Or maybe the beginning of a tornado. 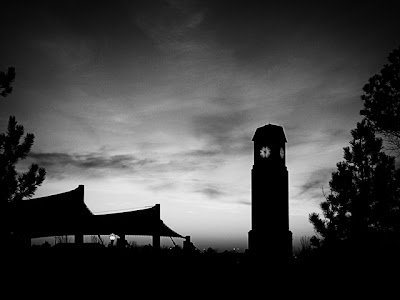 Switch that to a Sepia tone, and now it feels very Oklahoma Western. 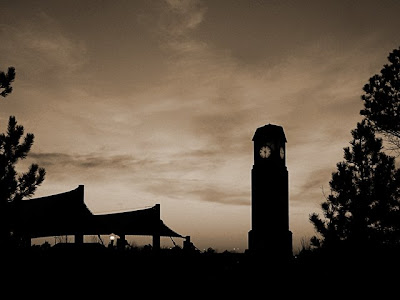 This is a peculiar but fun little action called Heartland that reminds me of a vintage postcard. 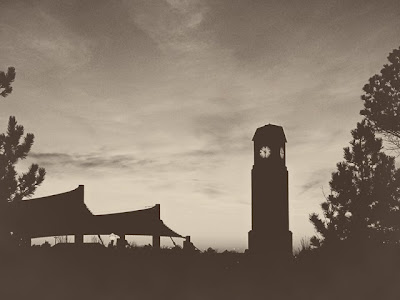 And last but not least, another one of my favorite actions called Colorized. 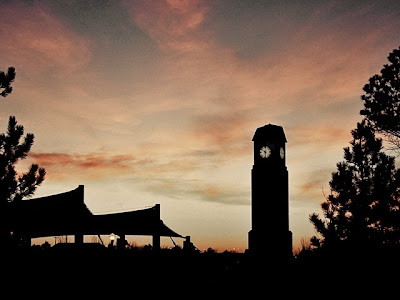 These actions, all from the Pioneer Woman and available at her website, are lots of fun if you use Photoshop.
Posted by ann at 8:28:00 PM 1 comment:

Why The Bachelor makes me thankful

Times are tough in TV land, and tonight I settled on The Bachelor from sheer lack of other choices.

Surprisingly, this experience made me more thankful than anything.

Things I am thankful for after watching The Bachelor

This is probably the last episode I'll watch. One dose of thankfulness is enough.

Email ThisBlogThis!Share to TwitterShare to FacebookShare to Pinterest
Labels: singleness

If there is one thing I hate most, it is being wrong. No, really. I hate being wrong. Perhaps the only thing I hate more than being wrong is someone pointing out when I'm wrong. It's a terrible personality flaw caused by a deeply rooted sin problem, and something I have always struggled with- chronic performance syndrome. Always trying to be perfect so you'll like me. :)

That said, a recent realization drives me nuts. I fell off the dang bandwagon. Last July I posted about my weight loss last year, and kept on losing for several months after that. Until I went to Paris, I guess, all was great. But then it was too cold to run outside, and I got lazy and fell into that easy trap of thinking that weight loss/exercise was a means to an end rather than a change of lifestyle and mindset. It's easy to enjoy the fruits of all your labor and forget that you still have to labor to keep those fruits!

So I've screwed up. And gained weight. Not a horrifying amount, but enough to piss me off. No running for a month, and then instead filling said month with Christmas treats is brutal! And stupid! I hate being stupid.

But like I said a few posts ago, it's a new day! And I've been detoxing for the past week or so. Next week the gym opens and I'll be a rat once more. So there you go, my little confessional. Not only that I fell off the wagon, but that it makes me mad to a disturbing degree. Don't expect me to admit I screwed up again for a while. ;)
Posted by ann at 9:50:00 PM 5 comments:

It's fun to look back through old pictures and see how my personality was well in place early on. 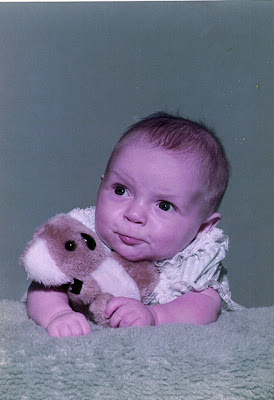 Some of you are probably thinking, "Hey! I've gotten that look from Ann!" Ah yes, it's true. I had it down by 4 months. 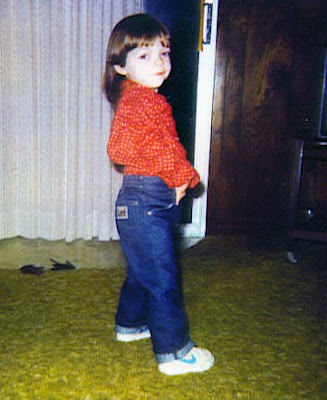 Lord have mercy, baby's got her blue jeans on... I like to shake my little tush on the catwalk. 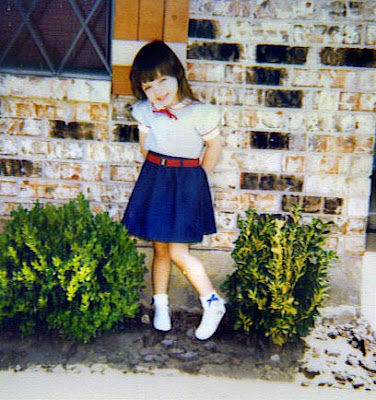 This was my favorite outfit in kindergarten. Once again, posing. 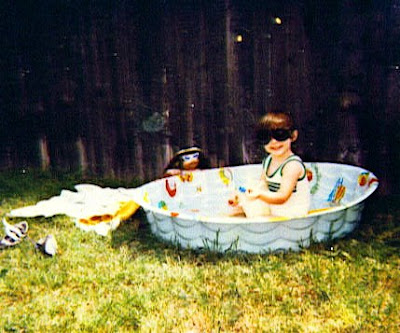 Chillin' with my homeys at the pool. At this point, though, I only had 1 homey- my cabbage patch doll (to the left of me). And massive sunglasses.
Brace yourself for the piece de resistance... Consider this my late Christmas present to you. 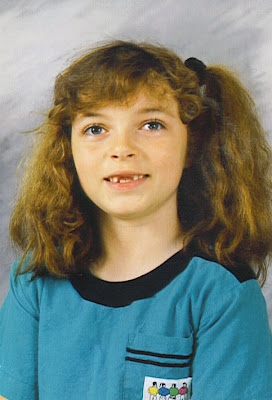 I roared laughing for about 5 minutes when I saw this. :) Bless my little 80s heart. And believe you me, I thought I was smokin' hot. It takes confidence to go toothless with a perm and side pony tail.
Posted by ann at 5:46:00 PM 4 comments:

Email ThisBlogThis!Share to TwitterShare to FacebookShare to Pinterest
Labels: pictures 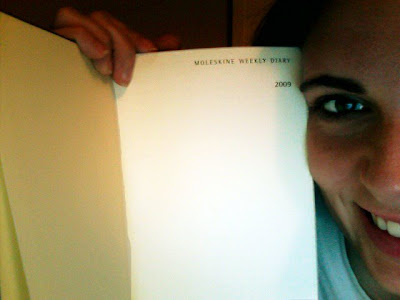 Technically, it's just another day. But it's new day- a fresh start. I bought my favorite day planner for the year, and it's empty. Clean slate.

Write in those evenings with friends.
Write in the nights at the gym.
Write in weekends to go home and spend with family.
Write in loved ones' birthdays and anniversaries.
Write in time alone.
Write in the important things that may quickly go by the wayside as other things fill up your schedule.