In the spirit of the Olympics and globalization and all things cultural, your favorite sensei is once again here to broaden your mind and education with what I will call:

10 Things You Should Know About Brazil 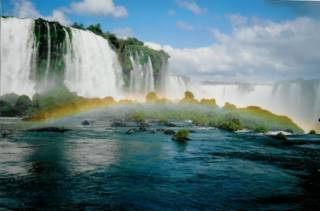 Foz do Iguacu
Posted by Hello

I wrote this post in 2004 based on three summers I spent in Brazil. In 2006 I moved to the city of Itu for six months. It was one of the best experiences of my life and the country of Brazil is very dear to my heart!

That said, there are so many other things I'd say about Brazil now, 5 years later. It seems silly to sum up this beautiful, diverse, complex country in 10 points. But congratulations to Rio. I look forward to seeing que delicia the 2016 olympics will be! Deus e Brasileiro, ne? ;)

Below- proof of my love for Brazil. I almost got suffocated by a huge Brazilian flag at a national volleyball game in Brasilia. :) 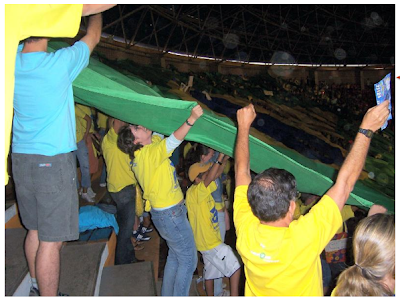 Have you been to Brazil? It looks good.

Yep-- I've spent 3 summers there and hope to live there someday! :)

Simple and great post about my country. Hope to see all you guys here in 2016! :D
Beijos (kisses)!
l.

Great blog and great post. I really thought you were brazilian at the beggining. Nice picture with the huge flag. From a brazilian guy who also likes to meet other cultures.