What I learned from 200 high schoolers' essays 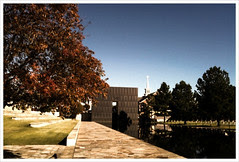 Last weekend I served as a judge for the Oklahoma City National Memorial student essay contest. The prompt for the essay was based off of this quote from Oklahoma City police chief Bill Citty:


“It is important to remember that the majority of people are good and we can’t live our lives in fear.”

I was a little hesitant going in, not sure what the quality of student work would be and if it would make me hopeful or fearful for the next generation, but I was very pleasantly surprised. These kids were 1 or 2 years old when the Oklahoma City bombing took place. They were 8 or so on 9/11. Here are some things I learned after reading about 250 of their reflections on the presence of good in the world.

Some kids have been through some really bad stuff

There were essays about assault, abuse, rehabilitation, suicide attempts, racism... it was very interesting to see how some kids have grown up way too soon, especially compared to their peers whose most trying life circumstance was losing their cell phone.

9/11 was a major mental impact

I'd say at least 2/3 of the students referenced 9/11, almost always talking about the intense fear and insecurity they felt after that day. My last blog was about the mental impact on me as a 19 year old, so I can't imagine being a child at that time.

Bullying is a major issue

Of course you hear about it in the media a lot, but many students wrote about being bullied. And many also wrote about using some of the tools now being taught in school to confront their bullies and try to get to know them as people, or about how some other classmates befriended them and made a real difference in their lives.

An oft-repeated theme was Christian students (they were pretty upfront about their faith) thought that giving Taco Bell and/or McDonalds to a homeless person made them a major force of good. Now don't get me wrong, that is a good thing, but I was a bit surprised by the hubris of these kids, and how often it came through. They were far more likely to talk about themselves than others.

The recession impacted these kids greatly

A lot of kids wrote about their parents losing their jobs in the past few years. It's interesting to see these kids' perspectives on the unsettled economy and how they have coped with it.

If someone means a lot to you, tell them

Many kids wrote about people in their lives. Not the obvious role models and influences, but those you might not expect. So many times I wanted to write them back and say, "Have you told this person what they mean to you? Please do it! I'll bet they have no idea." If someone means a lot to you, let them know.

It's the small things.

The best essays weren't necessarily about the major, dramatic moments of life, they were about the small, unexpected, unobligatory moments of grace, generosity and kindness.

Overall, I had a great time. I can't wait to do it again next year, if they'll have me. I left feeling optimistic about the world and thinking about all of the lights in my own life. What more can you ask for?
Posted by ann at 12:25:00 PM 3 comments: