71 days. That's how long this year has to turn it around.

I'm not going to lie. 2009 has been rough. I feel more strongly about it than that, but I'm trying to not fall entirely into the swirly twirly darkness of self pity.

But back to the issue at hand- 2009. It just feels like it's been blow after blow- emotionally, physically, spiritually, and professionally. Probably least of all professionally, but that in and of itself has so skewed my worldview. Since when do I look to my job for stability I can't find in any other area of my life? That is so not me.

I was telling someone the other day that this year my faith has taken a beating more than any other, including the years I was so sick. It feels like that was one large trauma, whereas this year has been a multi-front attack.

And it's just exhausting. Everytime I feel like I start to secure my footing, something else- usually major more than minor- flies out from under me. I'm just overwhelmed.

I've tried for quite a while to avoid the pronouncement of flushing the entire year down the proverbial toilet, but sometime last month that dam just burst and now I can't get it out of my head. And the bad part about that is it becomes a self fulfilling prophecy, ya know? So that is a catch 22. If I keep saying 2009 sucks, then I'll focus on only the sucky things that happen.

So hence the title. 2009 has 71 days for something(s) fantastic to redeem itself. 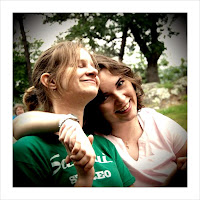 Sunday I said a very tearful and sad goodbye to one of my best friends. One of those rare, true friends.

This may sound strange given the past few years, but this is one of the hardest friend goodbyes I can ever remember saying. I've said my fair share over the past few years, but most of them were by my own choosing as I moved hither, thither and yon. And that is different, because when you're on the leaving side, you have many new, wonderful adventures awaiting you, as I know my friend does.

It's hard to not be selfish. I want to be sorry for myself as she leaves. Growing up also means you realize what a treasure true friends are. This year especially has been so difficult, and she offered such stability and security when it felt like everything was falling apart.

But I can't wait to see what the future holds for her. She's following her dreams and the path God has laid out. And even though it is so painful to let go, my prayer is that my joy for her future will be greater than my own sorrow at her loss. And I think it is.

Perhaps that should be my prayer for the year. That the joy of hope will outweigh the sorrow of loss.

*Interestingly enough, this picture was taken the day that we met.
Posted by ann at 8:27:00 PM 2 comments: