The day Lady saved me from a coyote

Yesterday was exciting. I go to a local state park with the dogs most every weekend, but yesterday was a first for us.

Yesterday as we approached the deer (in a spot we've gone to dozens and dozens of times), I noticed the deer were moving towards us, even though they saw us. I thought that was odd, but figured there were some walkers or hikers or something on the other side we couldn't see.

So Lady does her stalking and chasing.


She does her thing, comes back, and she and Davy find some deer bones and sniff around. Suddenly I look up and see something unusual. A gray dog with a huge puffy tail- aka a coyote. Looking at me. Coming towards me.

My first thought was, "Oh crap, I don't want Lady to chase that coyote. I don't want her to fight it. AAAAAAAAAAAH!" So she sees it, goes on point, then chases. I was flipping out. Of course Davy chases after her, and I was like, "Dang it, Davy! You're like a chicken nugget to a coyote!"

So I'm freaking out, because Lady and the coyote have gone into the woods and I can't see them. Lucky Davy doesn't run that far, and he's about 100 yards from me. Finally Lady runs back out and I was so relived. Lady and Davy pick up deer bones and run about a quarter mile the other direction, so I start walking behind them. A minutes or two later I look around and realize the coyote is back. Again, coming up behind me.

Suddenly it dawns on me. The bones, the patches of fur... we are walking in the middle of an area where a coyote has taken down a deer, and he wants to finish his meal.

So I start running back to the car!

And I called the dogs to follow me, which they do, but Davy, oh sweet Davy. Lady is fast and running ahead of me, but I keep looking back to make sure Davy is coming. And that stubborn dog will not relinquish the huge deer hip he has found. 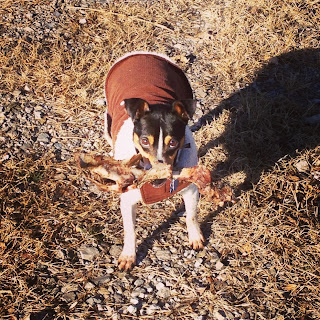 So that is my adventure with a coyote. Luckily I only saw one- I am assuming it had a partner somewhere nearby. Beware when you tread atop a coyote's dinner!

Do I think the coyote would have been aggressive towards me? I don't know. They're typically shy, and the fact that it was clearly coming towards me and I was between it and its food gave me serious concern, though.

Lady got some special treatment the rest of the day. She really is the best. :) 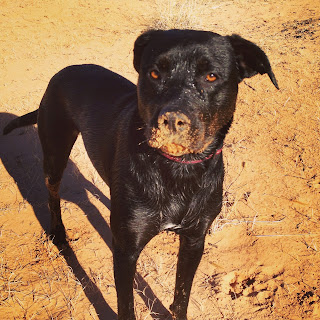 What a great dog! She's a keeper! What park do you go to? I'd love to take my dogs out.

Hello There,
My name is Melisa and I'm a Professional Blogger. I have more than 3+ yrs of experience writing for the web and have covered plenty of interesting topics.
I came across your blog and was wondering if you would be interested in allowing me to write relevant & useful topics on your blog at no cost.
At this point of my writing career, I simply want to get more visibility for my writing and I will write for free as long as you are fine with me adding a small author bio section following the blog post about myself.
Please let me know if you are interested and if you'd like for me to submit a sample blog post for your approval.
Thanks a bunch,
Melisa